Well, at the time of this writing .. TM Unifi has not yet provide ready-made IPv6 for us.
(probably hidden under some test-bed environment only i.e MYREN network)

Anyway, if you are eager to get hook onto IPv6 now, the choice are either getting a tunnel
IPv6-over-IPv4 .. which is provided by quite a number of provider :
namely :

well, each of them got their own tunnel provided and step.
Tried Gogoc on CentOS, work like charm.. except sometime ..
I had ..
“Failed to TSP.. bla bla”

For sixxs.net , the registration took longer than the others..
so, I just jump to next one.. he.net

After registered, login, create regular tunnel.. wait few moment..
It assigned a ::0/64 for me. . and the script provided for linux too.

copy & paste that script into the router box .. and it just work !

I choose the “Linux-net tools”

then, to route the IPv6 to the whole network behind me ..

I just .. adding the routed network (/64) into my internal LAN interface.

Ok, now time to get the Forwarding to works.

or made it permanently .. by adding the following line into /etc/sysctl.conf

then install the radvad .. (some said it is kind of DHCP server for IPv6 )

then configure the radvd to advertise the IPv6 internally..

then try monitoring it for few moment.. 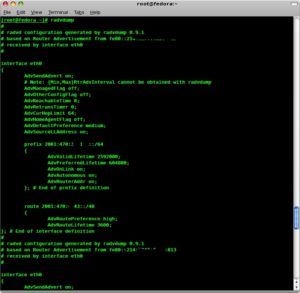 then clients .. such as nexus one, htc wildfire will pickup the IPv6 automatically..
as this box also had DHCP server running for IPv4.

and it would just worked ! 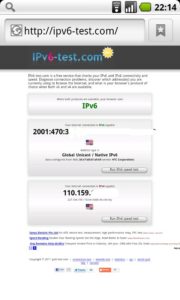 so.. now ..
http://ipv6.namran.net is alive.. (only reachable via IPv6 infra as it set to listening to ipv6 interface only) yay !