In this post I will explain on how to Install windows XP on Xen virtualization engine in CentOS 5.
In comparison to VMware based virtualization .. this one might be a bit behind in term of functionality and user-friendliness.

Prior to the installation process.. make sure you had the Windows XP Installation CD handy or

copy it into the system itself in iso format..with these command.

First of all have to make sure ,you’ve got the xen kernel already installed.

if not having yet. better off start with

then all the virtualization package will be installed..

after all packages has been install.. you can start the virtual machine manager

the status will change to Active 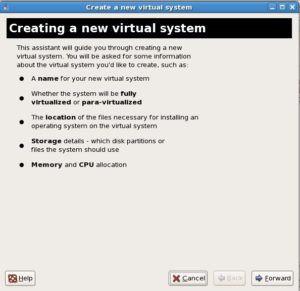 Press Forward.. it will asked for the new system name.

Put any name that make sense to you.. and press Forward.

and it will asked for virtualization method..

in this case it will be fully virtualized with some choice of architecture to be selected.

and press Forward button.. and it will asked for Locating installation media. 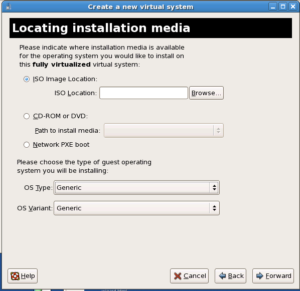 here you can specify where to get the installation media.. as per defined on the first paragraph in this article.
Press Browse button and point it to the iso image that had been copied earlier.

or anywhere you have put it.

and also specify the OS Type .

then it will asked to assign the storage…

Here you can select either pointing to real physical device or just to a single file..

Press Forward and it will asked for Network interface to connect to host network.

then time to Allocate Memory & CPU..

and press Forward.. ready to begin screen will pop up..

whenever you hit the Finish button.. it will automatically start with.. creating storage system.. 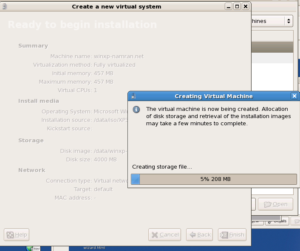 Creating domain.. and then starting to install windows.. 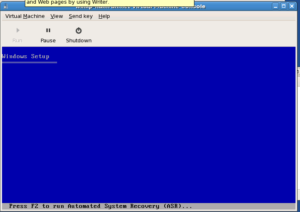 hmm.. it will go on.. like the normal windows xp.. here can notice the CPU load will go up..

hmm.. here I did play a bit with the display.. 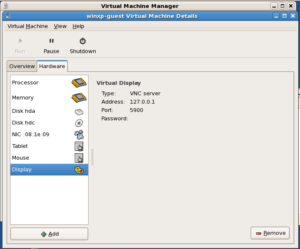 so that when i use ssh with port forwarding.. to the box from my other machine (nbnamran)

i can view the xp machine with just

p/s : this one project failed me because.. I am unable to use my USB Network Card(dongle) with the windows XP XEN virtualization guest.

there are simply no option to attach USB dongle from the Virtual Hardware . some were pointing to manual hack at the config.. but to no avail..

some got it worked to attach USB thumbdrive.. but not that simple as the “VMware Player ” interface .. (which can just unplug-plug. ).. lol. 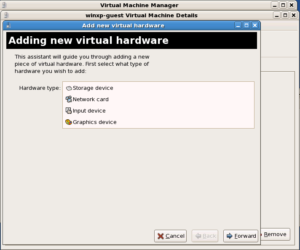 and my personal comment of CPU load.. it is very irriating.. as same machine to use VMware virtualization would’nt suffer that much CPU load.. though.

may be some time later to write about VMware virtulization instead.. *sigh*