Well, I’d love to discover new thing and try something new just to learn how it work.
That’s one of the thing that I wish will remain even after growing up and being old man . 😛

So, I’d ordered some stuff from http://www.cytron.com.my at few months back.
At that time, it mainly because I need its “Programmer” connector to upgrade the firmware into one of the
chip we used in my office’s research / test component.
Instead of just ordering for the cable, I order the whole start-up kit.
Or more precisely , I bought the “Final Year Project Starter Pack 02” from cytron.com.my.
(oh..btw, I didn’t claim any single cent from the office for this one.. therefore,the whole set are rightfully mine. :P)

After the connector is no longer needed, as it was just to upgrade the firmware on one of our RnD board.

After almost a year,I opened up the box and start looking at it.
Then I thought why not just open the box and write something like.
“Writing C code,compile to HEX and getting it into a micro-controller chip with PIC18F4550″‘.
I spend first few hour to get everything hook up correctly and successfully wrote something on it. 🙂

This starter pack includes the PIC microcontoller, LED as output, push button as input, multi meter for troubleshooting and verification, programmer and bread board. A comprehensive set to start for me.

So, I connected everything starting with . 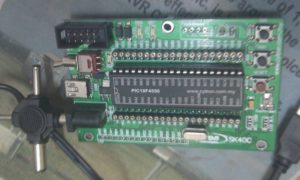 and. this the programmer interface ..”UIC00B.” 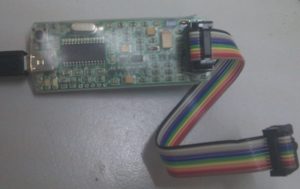 Then, UIC00B Programmer interface to USB port on the PC.

There is avalaible tutorial video how to connect all this.

Aha. before that, I just need to install some software on my computer first.

Some of the software are provided inside the CD that come together with the Packages.
except for the Hi-Tech C compiler which I failed to use its Lite version.
So, I downloaded the “MPLAB C for PIC18” lite version from microchip website.
Which run beautifully without problem..

MPLAB IDE interface is as follows. then it would become something like this.
at which I can add files and more thing into it. 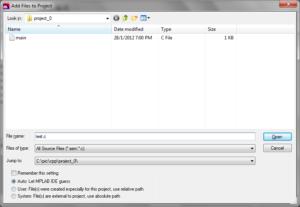 Adding it so that I didn’t have to re-define the whole port for the PIC18F4550 manually . 😛
To use .. I just define to include those file header into my c code. 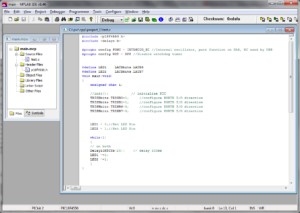 some setting at the “configuration bit.” Disabling the “watchdog” and “low voltage ” then try to build it out. ;P 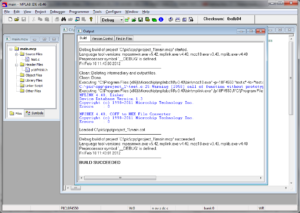 then time to connect and upload it to the real chip.
this can be done in two different way..

One .. get it to generate the HEX code, and manually use PicKit 2 to write into the chip.
however.. to save the configuration bit.. from the MPLAB IDE.. use the File -> Export .
then the HEx will be generated.

From there.. just run PIC Kit 2 and .. connect the PIC programmer cable, rainbow cable, power on everyting,
at PIC Kit 2-> Tools -> check communication , it shall report as connected.
Then.. just File -> Import Hex, then WRITE !. Other easier way , is to use MPLAB IDE interface .. Programmer -> PIC Kit 2.

then .. set the programmer setting.

then.. just clean .. and rebuild all.

.. with the programmer connected. it would spit something like this. 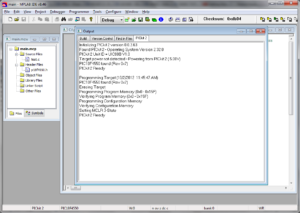 power on the SK40C alone.. then it would run the new HEX as expected. 🙂

p/s : ..for the next thing,maybe is to get the UART connected to a GSM modem, connect the relay to one of the DI, write C code to receive and decode the received SMS.. and act accordingly to turn on/off the relay.. and maybe add the LCD to show status.. relay to be connected to one of electrical appliance. or may be a series of electrical appliance..
then .. maybe get it integrated to a web interface just to encode the SMS to be sent to this device.

Hmm.. only until recently I realize my understanding of Digital Input (DI) is actually reversed of what I thought is Analog Input. . haha.