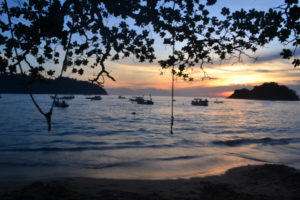 This is kinda a last minute trip as it falls on the weekends.

We took the road from Sg Buloh via NKVE to Bidor,Perak..
then follow the road to Sitiawan- Manjung – Lumut,Perak.

I think we left home at around 10.30am and reach there at 1.30pm.
We parked the car at one of the parking lot operated by local authority there..
which cost RM 10 / day. subsequent hour will charge pro-rated accordingly.

As soon as we’re getting out the parking lot,we were approached by the agent
to propose the accommodation and local transport.
Because we are traveling in sort of hurry didn’t booked earlier,
I just comply with the first one and asked for family room and a car..
Eventually the deal is made for family room costing RM180/night and car RM80 / day.
.. The agent advices to stay at Teluk Nipah as for the ease to get food stall and
Muslim friendly surrounding ..

The ferry only charged to adult.. as my kids are not yet chargeable ..:)
RM 10 each for return trip.

~ the ferry service that day not that crowded but packed enough to full utilize the ferry seating.
I think we have to wait until 3.30pm for the ferry to depart.
Once arrived , we call the local agent for the car rental pickup..
amazingly it was just right outside the jetty itself.. so from there just drive to the booked hotel earlier.
Hmm.. the car is quite old .. and the petrol station just few meters from the jetty .
Didn’t know how much would be sufficient , I just filled upto RM30…

The road to Teluk Nipah from jetty is pretty much straight forward but I think
have to get through two small hills to pass.

Eventually we reach the hotel and checked in.. family room at the ground floor..
So it is so much comfortable for us with small kids..
Two Queen bed if not mistaken.. and the room is spacious enough.
NO internet at room but I think WIFI available at the lounge.
But the phone coverage is good enough.. can get HSDPA/EDGE most of the time.

After checked in I think is already at 4.30pm..
so , we just head to nearest stall at the Teluk Nipah..
At one of the stall, with nice view to the sea.
We take a seat and ordered :
one laksa..
one char kuey tiew with “kerang”..
one nasi ayam..
one ice lemon tea ..two ice milo..

a bit shocked.. as the food are not up to expectation.. can’t even finish the laksa.

later found out from one of the cloth shop ..
the food there is very expensive but not that tasty ..
suggested us to drive down back to Teluk Bugah and see thai foodstall somewhere there.
Which is much worth the money. which later where took our dinner.

Nevertheless, the rest of the evening we spent at the beach at Teluk Nipah
and asked around for the boat trip to round the island and to snorkeling site.
We enjoyed the beach and sea wave that evening..

Hmm.. until the time to get off.. we noticed the water started to come out from the
nearby river bank.. which is smelly..
So.. we left the beach right before the sun goes off..
And took shower at the hotel..
which is convenient as they put the water shower right at the roadside. hahaha.

after getting the sand off our cloth .. we get into the room and another round of
shower.. changed cloth.. rest a bit..
decided to drive out and get some nice dinner somewhere else.

We visited pharmacy .. near the police station..
and the Jetty.. the other pantai..

and eventually found the food stall.
This time we ordered some small “ikan pari bakar”..
with few other dish..
two nasi putih.. two ice milo.. one fried mixed vegetable..
and cost about RM18..
while having dinner.. there is football match between Kelantan and Selangor (Super League)..
surprisingly waiting time for the dinner until the game end.. 🙂
I think the fulltime result is 1-1.

after dinner.. i think we drove again upto the airport
and decided to turn around.. as already at 11.pm..

I think around half hour past midnight , I got out to buy some mineral waters
from the shop.. and noticed there a still people at the beach..
this part of the island is still alive at this hour.. 😉

the next morning..
we took the boat the snorkeling site..
spend most of the morning time there..
visited the coral island.. 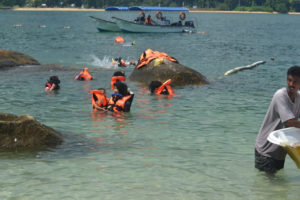 get back to the beach..
and have another round of shower at the hotel swimming pool with kids.

finally decided to drive around the island..
eventually visited the Dutch Fort..
spoke the food stall keeper there.. some history of resistance..
toward the Dutch..

Historical Rock..
(although I couldn’t differentiate what is the original painting/crafting or the vandals..!!)

then.. we took one full circle of the island road ..
just found out the road after the airport is very narrow..
and single lanes uphills.. with high slope…
( something that I am not gonna repeat ever again ):-!
The Pangkor Gallery and Libray was closed .. I don’t know if it is because of Sunday or not yet completed.

Eventually we got back at the Pangkor Jetty at around 3.30pm.
surprisingly we just need to leave the car at the parking.. with the keys !! ( haha )
and took another ferry ride to Lumut.. luckily this time the ferry is already waiting..
not that full.. so can get at the top-most ferry deck..

Upon getting to Lumut, we took the car out of the parking and I think was charged at RM 11.60..
And having another meal at the Thai foodstall..
this time ordered Siakap tiga rasa(small size ~ two person meal)..
three plate of rice.. mixed vegetable.. two ice milo..
one fresh orange.. and cost us about only RM25. (haha.. surprisingly cheap!)

Then..stopped by at the nearest mosque..
wait till Maghrib..
after that kids fall asleep.. ( didn’t managed to shop for anything else )
we just drive back to KL.. I think the sign would take us to Sabak Bernam road.
Have to carefully choose route to get back to Bidor exit and NKVE again after the Teluk Intan town.

An evening at Tasik Titiwangsa,Kuala Lumpur

Making www and @ point to the same servername in apache