After few trip to Saudi Arabia’s embassy in Kuala Lumpur…

which reside inside the “Dewan Perniagaan”..

.. we managed to get the Umrah’s VISA approval on the passport. 🙂

Then the journeys start the next day flight MH150 ~ which is departing Kuala Lumpur to Jeddah ,
at 1515H…

We arrived there around 6.30PM ‘s Jeddah time.. which is about Maghrib time..

We had a nice meal and “Air Zam-Zam” that night before completing our first tawaf and saei..
a bit tiring.. but am so excited and very grateful for being able
to visit Kaabah and doing “tawaf rukun” ( my first time as an adult.. ) 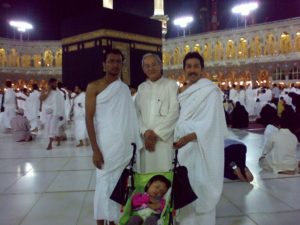 Thanks to Bajuri for guiding and assisting, touring with me during first umrah..
Alhamdulillah.. we managed to complete our first umrah by 0230AM .. 🙂
tired .. but WORTH it !!

then next day we returned back again to performed the 2nd UMRAH and
we repeat until the 7th one..
( there were said 7 UMRAH may had same reward as one Hajj )

From there to repeat was not that difficult ..

1. “Niat at Miqat outside of Tanah Haram” ~ intention at Taneem (6-8KM from Masjidil Haram) (outside the Holy Land)

there is a bus service .. which cost only SAR 2. (Saudi Arabia Riyal)

either performed “solat sunat ihram” there or not is optional as long as the intention is made there with IHRAM.

inside the taneem mosque ..

Morning time is a bit NOT PEAK hours.. so can be completed quite fast compared to other time.

.. then can remove IHRAM all do all thing that’s prohibited during IHRAM ~ TAHALLUL..

after that i was visiting around..
get to Hajaratul Aswad.. ~ the feeling is amazing.
Hijr Ismail.. Maqam Ibrahim..

Visiting around during Umrah