Right after the bungy jump..

the first round was free-play..

the 2nd round kinda got a correct starting line-up.. sort of.. hehehe

never had go-cart experience before this.. so it was interesting..
“you can drive whatever speed you want…”

except to remember that there is phrase which read as …

“if the accident occured.. you have to bear the cost to repair the machine.. okay .”

line up at go-cart.. Ok.. after done with the go-cart thingy .

we heading for the Elephant trekking .. somewhere near a elephant camp..

well.. from the start..
“this activity would not be adventurous like a bungy jump.. ”

so most of the younger team’s member doesn’t want to join.. except myself..
i not quite remember why did I agreed to join this activity though..

maybe it was just kinda an event to prove that..” what can go wrong.. will go wrong.. ”
“how to control something un-controllable..”

Ok..let’s see some photos..
1. the elephant’s ride look like this.. 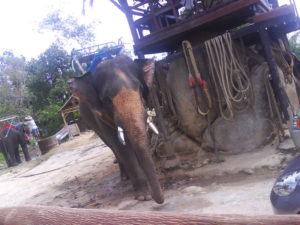 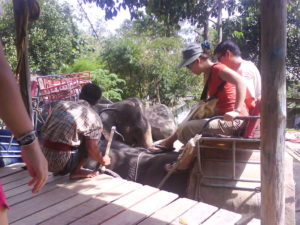 4. the 2nd elephant.. (Ling offered to me as Alyssa still sleeping…) ~ luckily he did offered to me.. hehehe… 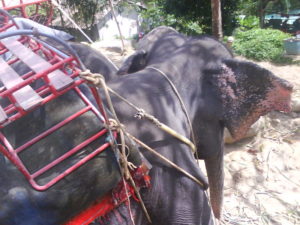 5. the first few nice moment while riding.. yeah.. we took some pics together also.. 6. i think this is the care taker.. before being thrown over.. 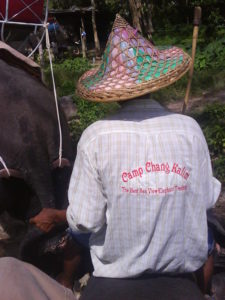 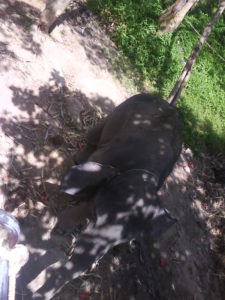 while we are feeding this other elephant i think.. the caretaker was just being too aggressive toward “Johny”.. beating him.. for not giving the feed to the other elephant.. somehow.. before i could even blink.. he just smack out the tree quite a few times.. then he start making sound …

and.. suddenly rush up quite fast.. until the caretaker itself thrown over..
left me alone at the riding deck..and start running upward the hill at the very hi-speed..
I was thinkin..
“Oh.. this is nice ride.. if it was planned to be like this..”..
except i had to hold tightly or else i think i would also had been thrown….
hahaha.. then.. until up the hill.. he still kinda not stopping..but still making some un-comfortable sound..
whispering in kelantan … “Doh lah tu.. boo lah” (i don’t think he understand … hahahahaaha)

and.. i think someone managed to catch us.. and hold his tail.. to make it stop for a while..
then only realized.. this could be the best moment to jump..
however i just heard..
“Kun..kun..kun”.. from the one who hold his tail.. (honestly .. i don’t understand what that mean.. hahhahahaah)

so i asked.. “Do you want me to jump or what ?”
(with my hand pointing downward..) – i think this is when my glass had been dropped in front of the elephant.. (oh..shit..)

without further ado.. the elephant move a bit forward.. and after i choose where to land..
(left-side of the elephant.. ~ this moment i was at the top of his head…almost falling forward.. geee…)
i jumped into the small bush on top of the hill.. with some rolling forward to counter the inertia for a fall (luckily managed to stop rolling with very minor injury). ..
(i think i was kinda doing some stunt.. hahahaa)
the moment i landed into the bush, the elephant had just run straight toward the hill track.. (and smashed out my spectacles.. *sigh*)

fortunately .. i was saved.. 🙂 ..
then i just walked out the bush and .. back to the base… seeing all my colleagues.. heheheehe..

then… then camp authorities perform some sort of medical check up upon me.. and refund all the fare that we had paid earlier..
after about half-an-hour or so….
“Johny” came back to the base… with a bleeding head/nose.. (so kesian..) and he was already calmed down.. and I managed to feed him with some bananas… (a way to get rid of fearing the elephant.. hehehehe)

p/s : i don’t think that Johny (the elephant) had ‘turun-minyak’.. but just went mad a bit..
as if ‘turun-minyak’… he wouldn’t be back within such short period…. woohoo, i felt like had just riding a mad elephant for a good 5minute.. hehhee !

that’s it for the day.. all my other colleague had also cancel their elephant trekking that evening..

conclusion : always be prepared for an Adrenaline rush..!